The El-Salomons, comedians and work/life partners, are Jess and Eman. Eman has a bit of a temper and Jess wears the pants in the family. Eman is Palestinian and Jess comes from a long line of Jewish Montrealers and Peruvian Jews. Eman can’t believe we fell for religion but is pretty obsessed with it and Jess might choose to have an adult bat mitzvah someday. They’re secure in who they are and love each other a lot. 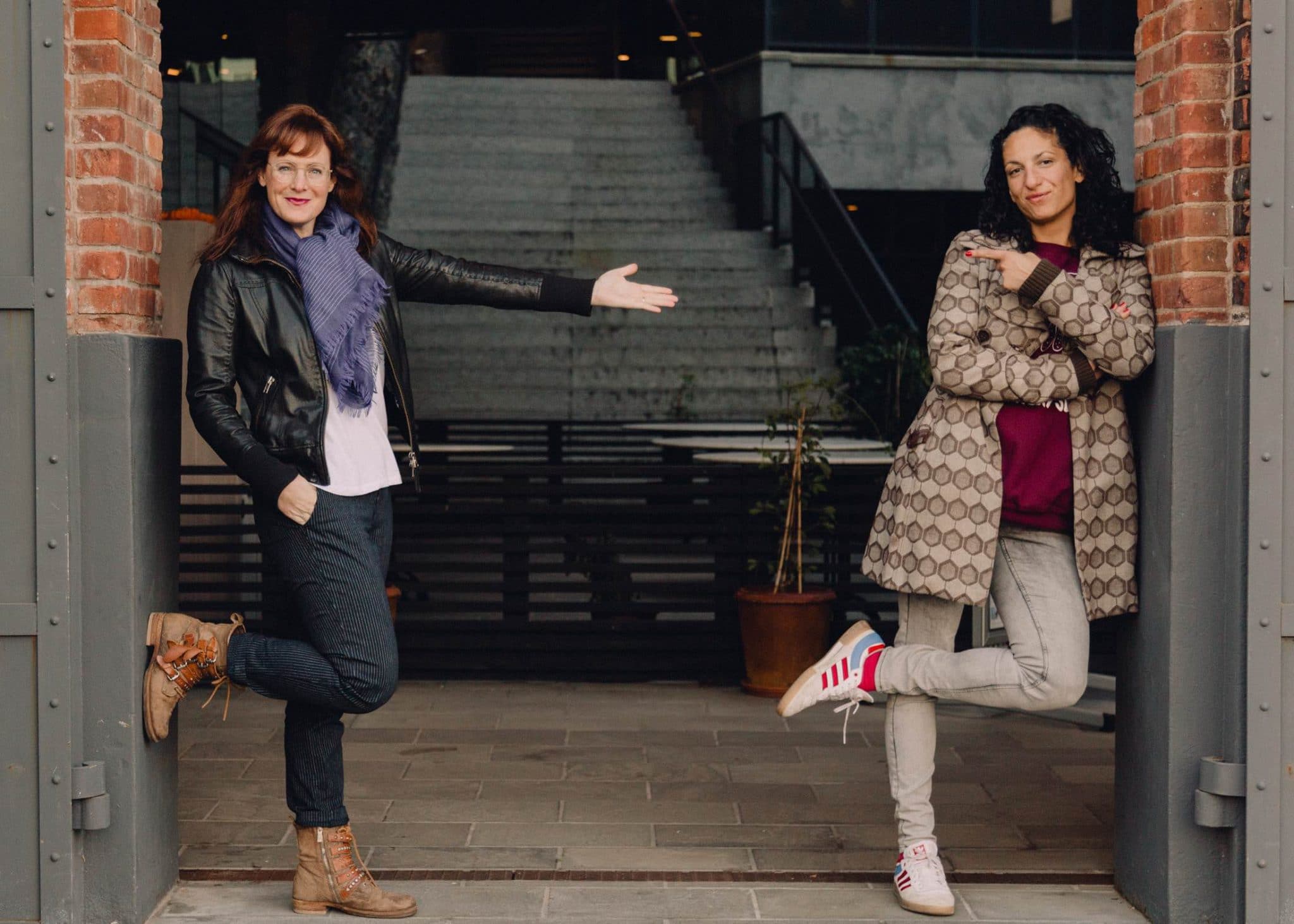 Eman: My mom wanted to name me Dema. My father, although he’s not religious at all, was looking for more of a religious name. Thank God, my mom vetoed that. They compromised on Eman, which means “faith.” It’s a nice sounding name and it’s kind of religious.

Jess: And it auto-corrects to “mean.”

Eman: She only brings that up because I have a bit of a temper.

I was supposed to be a boy, so my name would have been Jacques, which was after my grandfather on my mom’s side. In each of my mom’s siblings’ families, there’s a Jacques. Then, when I wasn’t going to be a boy, they just went with a “J” name. They were going to call me Jacquelyn, but my mom was worried that people would mispronounce it, so they ended up with Jessica, which was popular.

My dad’s mother’s maiden name was Solomon, and she married my grandfather, whose last name was Salomon. El-Salomon is a mix of our names that we came up with for our wedding and now the name of our show. It was also the hashtag for our wedding. People can still email us at TheElSalomons@gmail.com if they want to send a wedding gift. 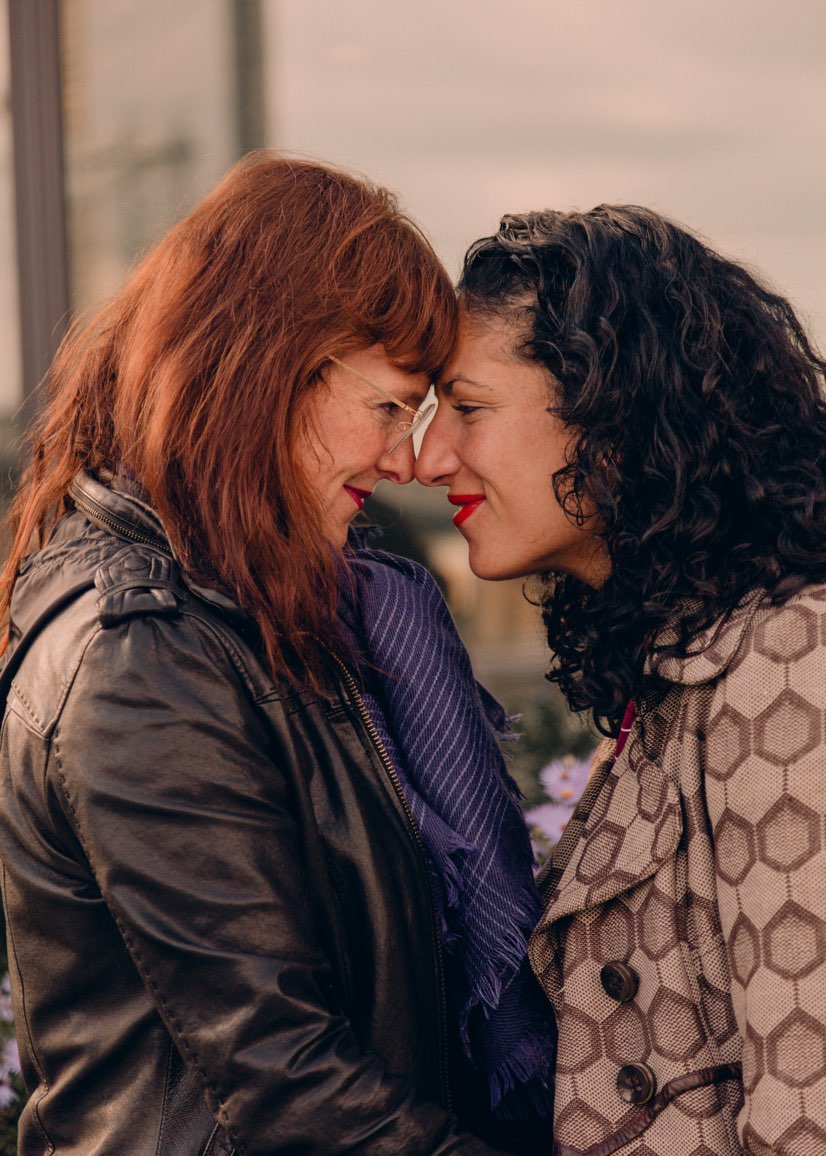 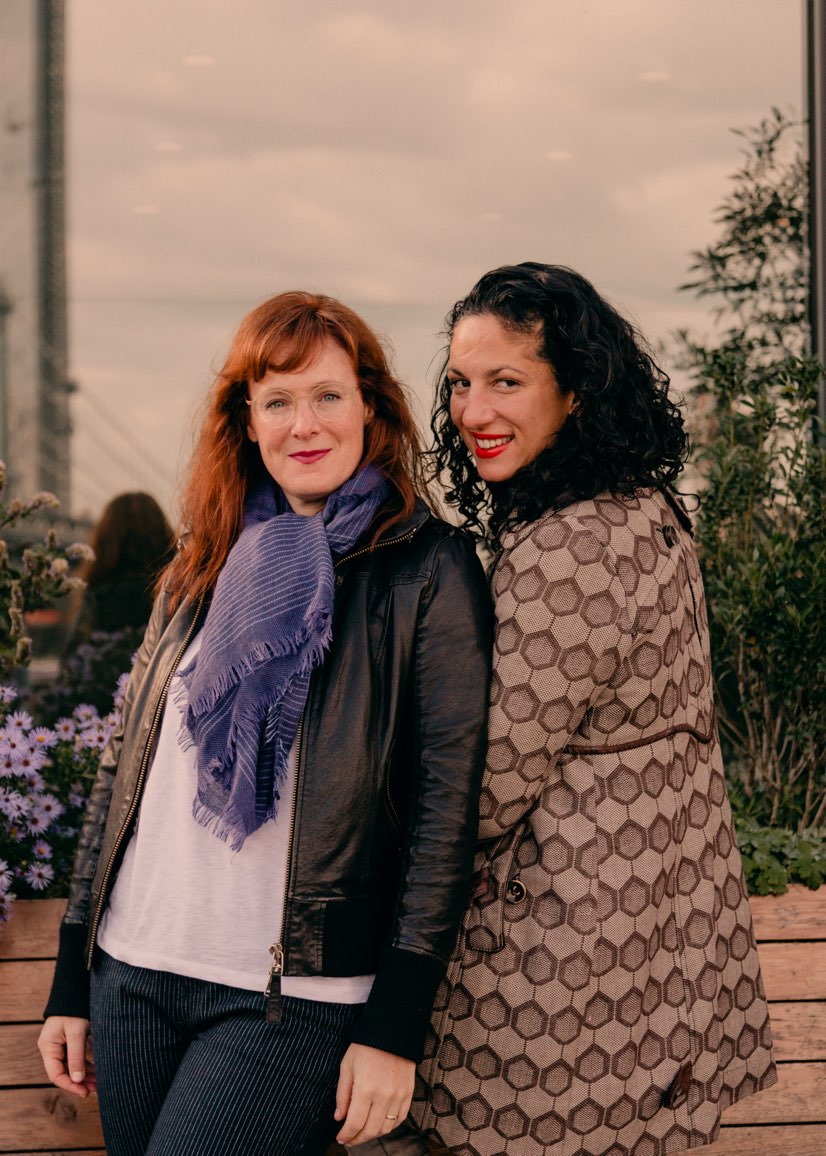 Where and who do you come from?

Eman: I’m Palestinian. Both my parents were born there, as well as my grandparents and great-grandparents. I was born in Kuwait and moved to Canada during the first Gulf War.

Jess: I am from several generations of Anglo-Jewish Montrealers on my dad’s side. My grandmother and my great-grandmother both went to McGill. My mom is from Peru. It’s an important country and place for me because I went there a lot when I was growing up. My grandmother came from Poland and my grandfather came from Egypt and Peru is where they built their life and business.

How did religion and broader spirituality play into your upbringing?

Eman: My parents never prayed five times a day, but there was a lot of pride. We weren’t very traditional. When Ramadan came along, we definitely fasted, especially when we lived in the Middle East. Muslim behavior was something we took pride in: being charitable, respectful, honest.

I’m fascinated by religion, because I can’t believe we fell for it.

I was a really good Muslim girl until I turned 21 and had bacon and booze. I stopped believing in religion. I felt like there was so much hypocrisy.

Jess: I didn’t go to a Jewish day school, and neither did my parents, but I had some after-school Jewish education. Some of it I liked, some of it I didn’t. It depended on the teacher, mostly. I didn’t have a bat mitzvah, but I took a lot of the courses for it. My mom didn’t believe in having a big party for a religious event. I don’t know if I’ll be one of those people who goes back and decides to do it one day.

I’m not religious. I’m definitely culturally Jewish. I do go to synagogue on the High Holidays. I really love my synagogue. It’s the synagogue where Leonard Cohen was a member, and the choir won a Grammy for its work on his last album. It’s not really so much about the prayer as much as I just like to be in that space and sit in the seat where my grandmother used to sit. It connects me to my family history more than it is a connection to God.

We have a lot of Jewish holiday meals, and Eman’s life has become very Jewish.

Eman: I joke that I used to be the go-to comic during the Jewish holidays because they knew that I would be available. Now, forget it.

Are there any religious or spiritual practices that specifically resonate with you?

Eman: Because I had a Muslim education, I always become extremely religious before a really important show. I start praying. It calms me down. I repeat religious prayers or sayings in my head to get in the zone.

Jess: I really appreciated the Jewish religion when I experienced a fairly quick series of deaths in my family. My grandmother passed away, then my dad passed away just a year later. My grandmother was old, but my dad was 70. It was totally unexpected.

The whole ritual around sitting shiva was everything that I needed.

The number of days, and the way that people are invited for certain periods of time but then you’re back alone with your immediate family, the way that people gather around and bring food. Even the funeral, because it felt good to see the rabbi and know that there was some kind of order to the whole thing. It was very wise and also comforting to me. 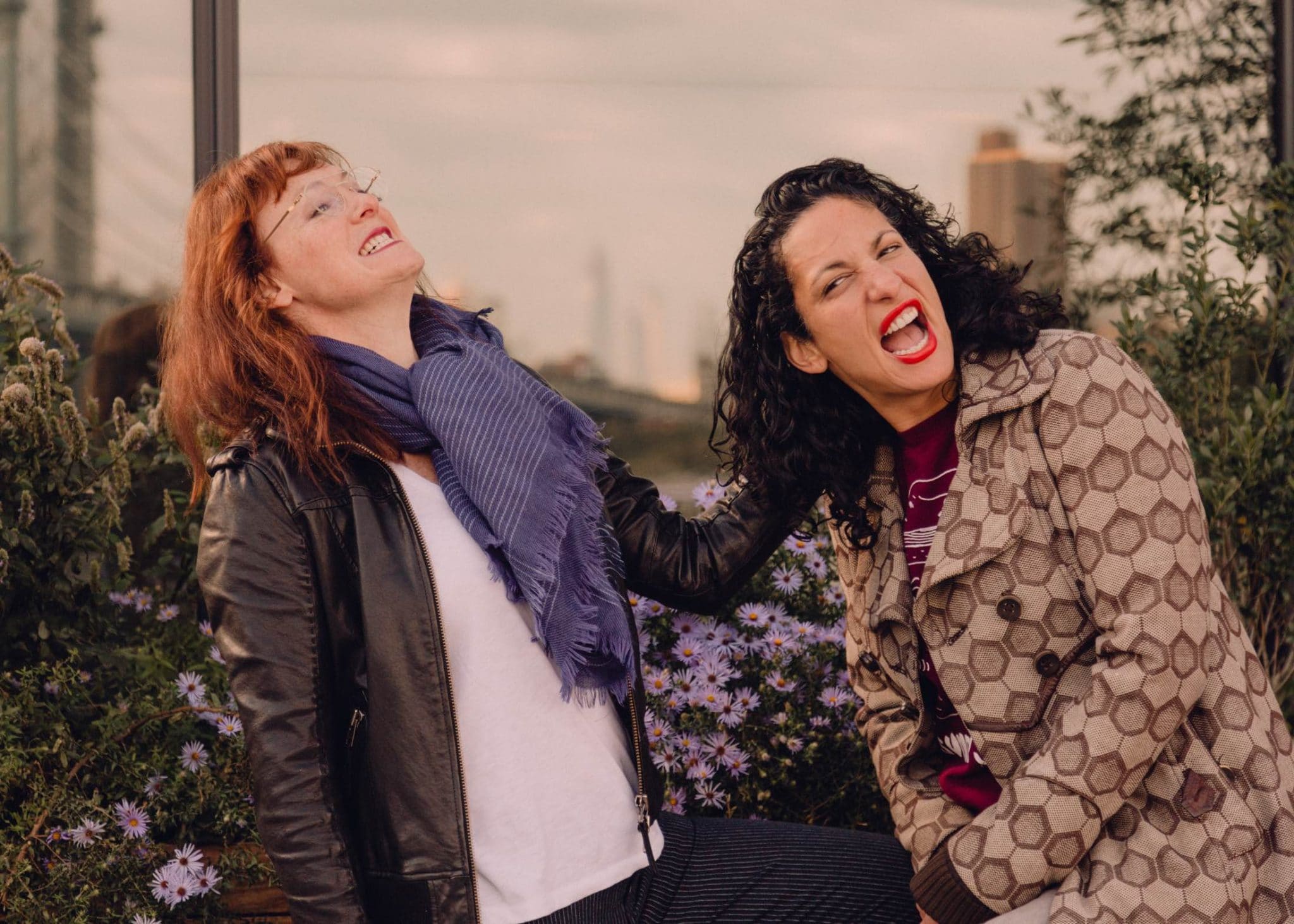 What is it like to be in a relationship with someone from a different background?

Jess: There’s a point in the beginning of the process where you’re navigating your family’s reactions. Your family doesn’t want you to be with this person, so naturally those kinds of disagreements can affect your romantic relationship, as well. Even if you’re solidly in love and know that you want to be with this person, it does create the question: is this worth it?

I don’t think there was any doubt that we would be together, but I certainly was very pushy about wanting my family and Eman to hang out and be best friends and get along. I love her, she’s amazing and I love my family. This has to work! That approach caused some friction at the beginning.

Both of us come from backgrounds where there’s so much guilt.

I don’t want to make my parents upset; they’ve fled wars, they’ve seen poverty and wealth twice in a lifetime, and I already broke their hearts when I dropped out of university and became a comedian. That was my first coming out story, and now I’m going to marry a Jewish woman. What?!

I was always inclined to be with somebody from a different culture.

I think that people should mix. It makes for healthier humans, for better-looking humans. There’s a clear sign from God.

Growing up in the Middle East, in Kuwait, you’re just surrounded by Arabs. In Canada, I was really into meeting people from different cultures, being outside your comfort zone, thinking in a different way, broadening your horizon. It was always very appealing to me, to my parents’ dismay. I think they’ve always kind of felt that I wasn’t going to marry within the faith or culture and they tried to steer me away from that.

Jess: Specifically, I think they always felt that you had a thing for Jews.

Eman: I had a lot of Jewish friends. Growing up, my first job was at a Jewish grocery store.

Jess: I feel the same away about branching out. I’ve always been interested in dating people that have a different life experience.

Eman: Both of us are pretty secure in our identities. What families usually fear when you intermarry is that you’re going to forget yourself or where you come from.

Your cartoons give us a glimpse into your relationship and how you work together professionally. What is one thing that really works for you as partners?

Eman: Jess and I are very similar in our core beliefs, but our work ethic is completely different. I always say Jess was a lawyer and I was a university dropout, so, clearly, I’m a lot more easygoing. Jess is a lot more regimented and focused.

Jess: That’s really where we have issues. I’m more Type A, kind of OCD, very neat. That, and our astrological signs are very not compatible.

Eman: Professionally speaking, Jess is the boss and I just do what she says. She wears the pants in the family. 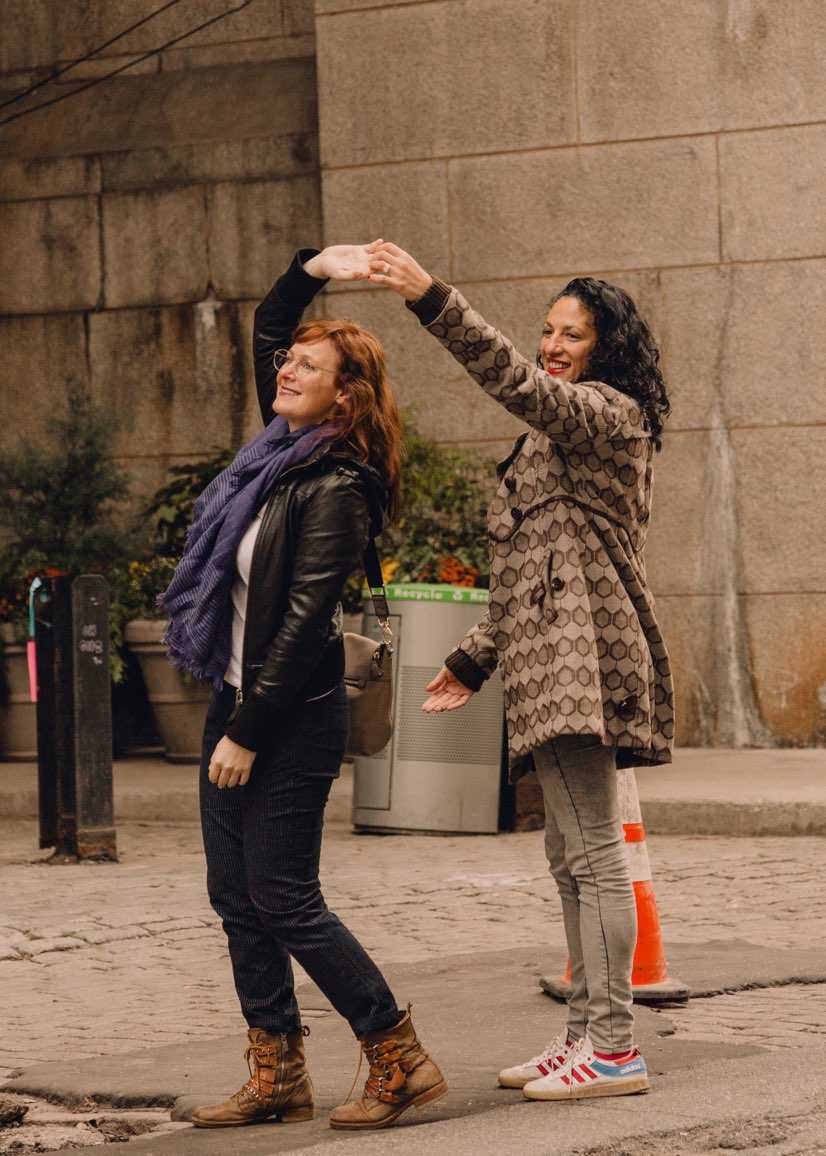 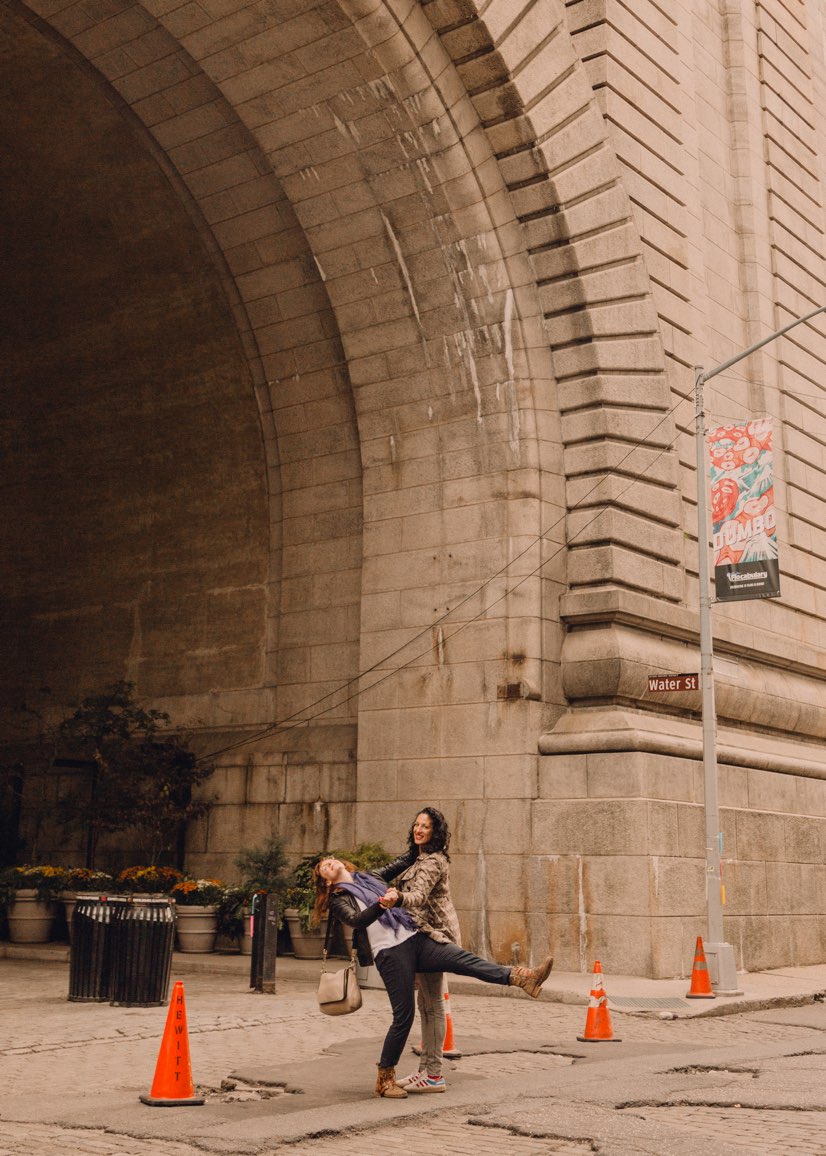 Jess: Be cool. Long-term revenge will be more satisfying.

What is something you have not figured out yet?

Jess: Whether to have babies.

Eman: Why life is unfair and some people have it so much better than others.

What’s something that you know to be true?

Eman: Self worth. It’s so important to value yourself. It teaches people how to treat you.

What qualities do you most admire in others?

Eman: Open-mindedness. Growing up in a relatively liberal era really has helped me so much. It’s all thanks to my parents for not being closed off. To me, open-mindedness means being able to be critical of our own people, not to just think that we’re God’s gift to the world. A lot of people who are strong on traditions are usually so close-minded.

Eman: Patience, because I don’t have any and I feel like it’s so ineffective. 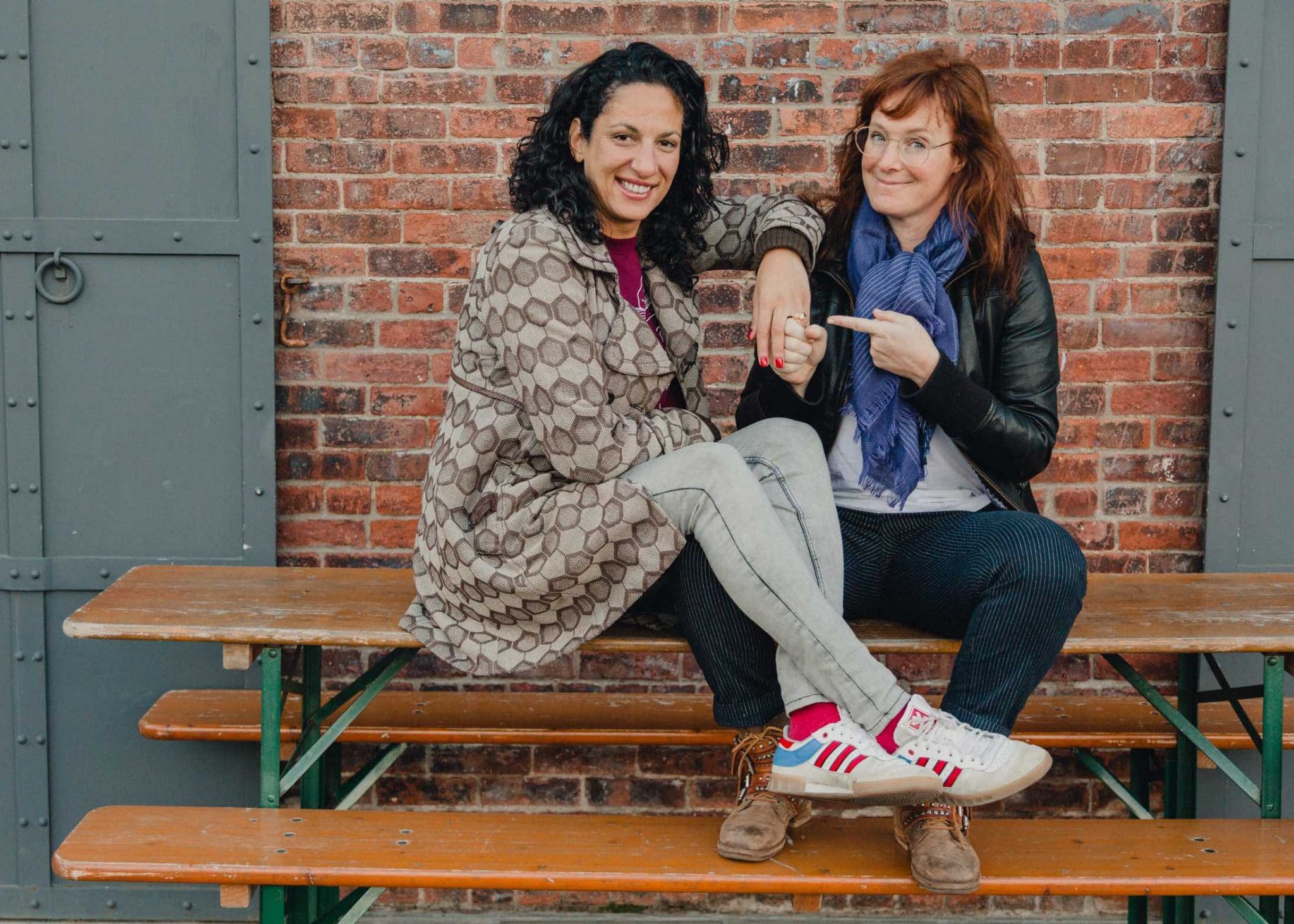 Jess: My bed at the end of the night.

Eman: One place where I felt at home was in Jerusalem. I went there in 2009. I was blown away, and I found that I really, really love old cities.

What is a cause that riles you up or an issue that you’re passionate about?

Eman: Any form of injustice is something that I was very sensitive to from a very young age. I cannot believe how sexism and racism are so normalized and accepted as the status quo, and how hard it is to get people to change their minds about something so blatantly wrong.

Jess: The health, safety, independence and education of women and girls.

What’s something that you’re curious about?

Eman: Dermatology. It sounds so gross, but I love skin stuff.

Jess: What happens after we die. Also, I still don’t get fax machines.

Jess: Smoked meat is the best. The worst is kishkes. Honestly, I’ve never even had it, it just looks so gross.