Rebekah Erev is an ordained Hebrew priestess, feminist, queer, artist, creativity coach, and teacher who loves the liminality of twilight, actually asked their parents to go to Hebrew School, finds politics to be spiritual, and believes love is an action. Rebekah is the creator of the Queer Mikveh Project and the Moon Angels Cards. 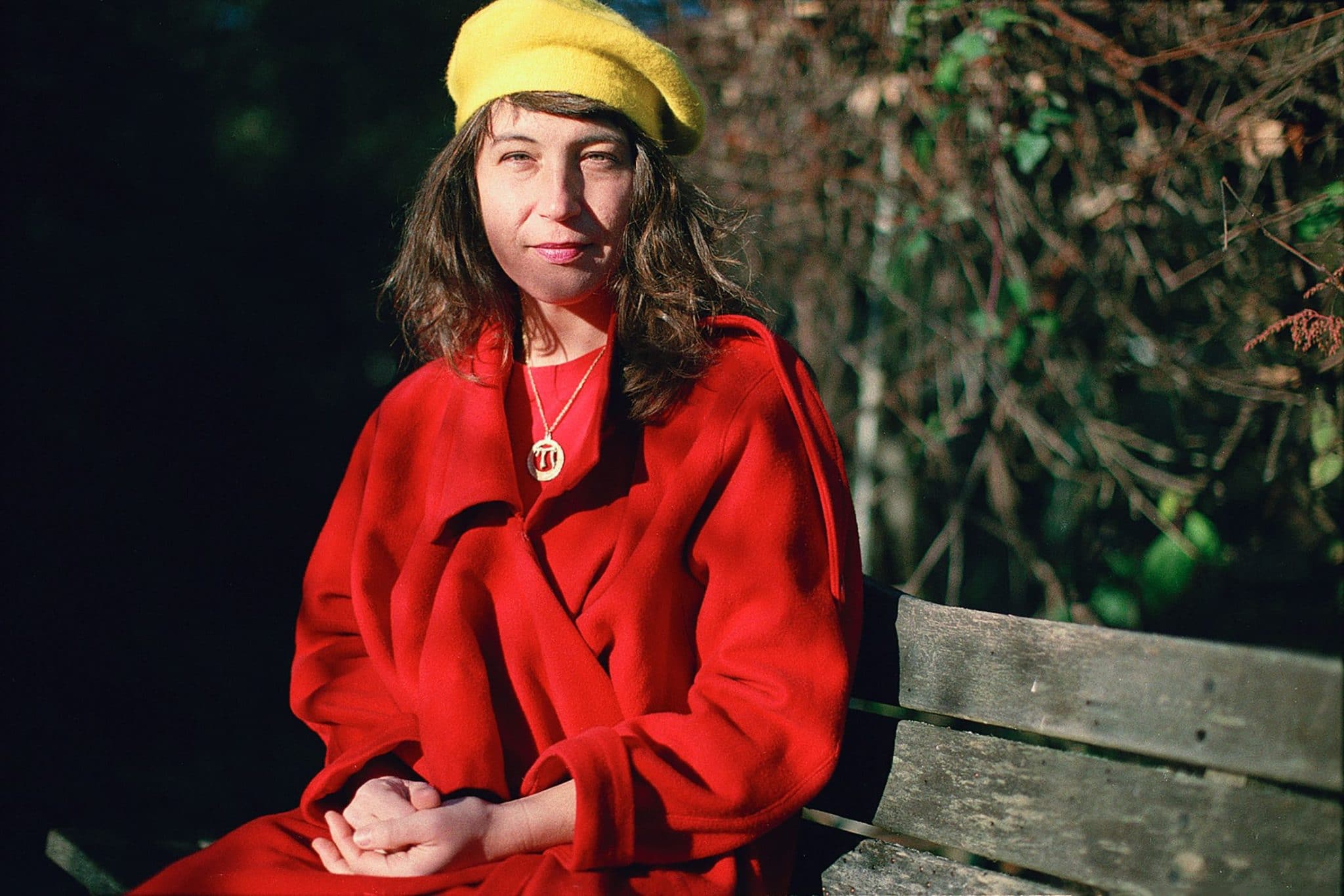 My name is Rebekah Erev.

Erev means “evening” or “twilight” in Hebrew. That part of my name is chosen. My dad’s not Jewish and my mom is, and I always wanted a more Jewish last name.

I also always wanted a bigger nose or to have more recognizable Jewish attributes growing up in a mostly Christian town.

I have always felt really Jewish and wanted the world to know how Jewish I was.

When I was in my Kohenet training to become a Hebrew priestess, I knew I wanted to change my last name. In the training, I started to hear the word “liminal” a lot. I thought, “Oh, that’s my whole life. What I’ve been interested in is liminality.”

Erev felt like a name that encapsulated liminality, because it’s not day and it’s not night. It’s this in between time, which also happens to be my favorite time of day. Since I was a kid, I always loved swimming in the ocean in the evening, and when the lightning bugs would start to come out, and when time turned towards the night, but it would also scare me. My name is an embrace of all of those things.

Where do you come from?

I always say I grew up in a demented South Jersey town.

My grandparents looked for a house there and they mentioned some street they were thinking about living on, and the realtor said, “You don’t want to live there. That’s Jew Row.” My parents moved there a generation later.

It’s quintessential Small Town USA in all of its dementedness and with a lot of the sweetness, too.

I grew up on a little one-way street with the houses right up next to each other. I could talk to my neighbor friends from our bedroom windows and cut through people’s yards. Our neighbors were friends with Patti Smith and Bruce Springsteen.

I grew up in this majority white town, and there were only a handful of people of color that lived there, only a handful of Jewish families, so, from an early age, I understood my differentness and therefore aligned myself with issues of injustice.

I didn’t know then that I was queer, too, and that was also a part of my differentness.

Renting “My Own Private Idaho” and watching it alone in the basement at my friend’s house and everybody else slowly making their way out of the room to go smoke pot outside while I stayed interested in the film might have been a clue.

I grew up really assimilated. We did Hanukkah, and we had Passover, and we usually did something for the High Holidays with my grandparents who belonged to a Reform synagogue, but we didn’t belong to a synagogue. We joined that same synagogue when I asked my mom if I could have a bat mitzvah. That put my brothers on that track, and they ended up going to Hebrew School, too. 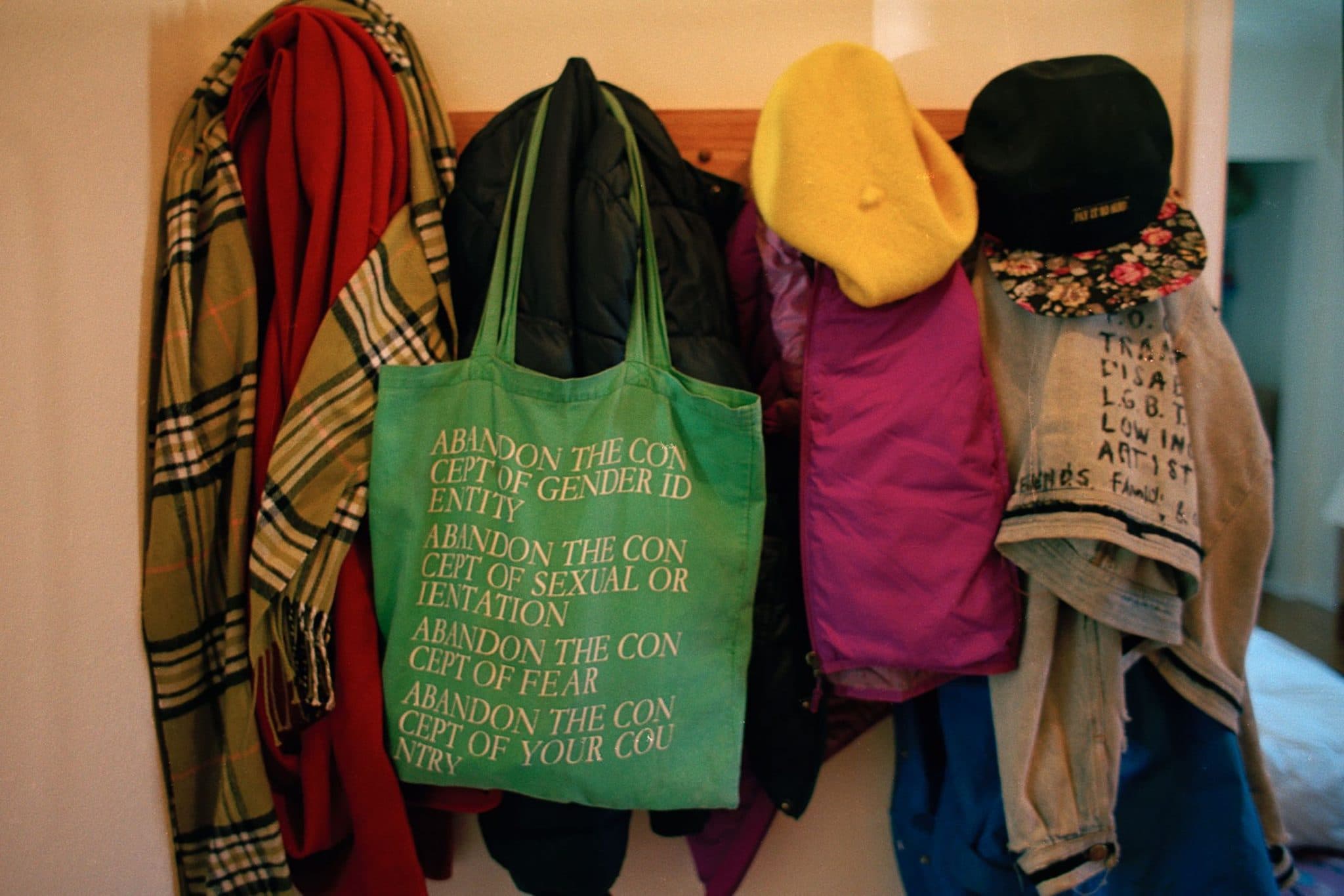 Who are your ancestors and what do you know about them?

One of the ancestors I’m most curious about is my great-grandmother Sarah on my grandfather’s side. She lived in Atlantic City and played mahjong with her friends, this typical immigrant Jew, but the mythology around her is about her being very superstitious. Some said she was mean.

Before I was born, they wanted to name me Sarah, but she said, “You can’t name her Sarah, because the angel of death will take the baby and not me.” That’s why they named me Rebekah. In this way, she kind of named me.

She spoke six languages or something. Saying that she was superstitious or mean are attributes that people often give to women who are witchy. This is where my curiosity about her lays.

My great aunt Clara, Sarah’s daughter, was such an incredibly loving presence in all of our lives. Her best friend was her sister-in-law Goldie, whom I also adored. The two of them marched on Washington, did civil rights work, and were socially engaged. It really showed in how they related with people in a day-to-day way, too. She wasn’t anti-Zionist, but she was very against the Israeli government and how they’ve treated Palestinians.

How has your view on Judaism evolved over time?

As we grow older we become more of ourselves.

I’ve always been on a quest to find an authentic expression of my Judaism.

The interest in my great-grandmother and in my aunt Clara is part of the search. I dearly loved my Jewish grandparents. We didn’t always share the same values, but they did things that I value, like they were always helping out Russian immigrant families. My grandmother had an amazing sense of style, and I have many of her clothes that I still really enjoy.

In my early 20’s, when I moved to Olympia and went to school here, I started to find more of a Judaism that I wanted. I started learning about the Palestinian situation, and a mentor at that time, Simona Sharoni, an Israeli woman, really educated me about those politics. The Judaism that I had been handed was completely wrapped up with Israel. My grandfather’s life dream was to go there, bring his family there. My great uncle was friends with Golda Meir.

In the early 2000’s, there weren’t a lot of Jews who were feeling what I was feeling. I was reading stuff by Melanie Kaye/Kantrowitz, and Irena Klepfisz, and Simona’s work. That really helped me.

Politics have always been spiritual for me.

That helped me let go and say, “This is the kind of Jew that I want to be.”

I’m interested in little glimmers of things that I learn about the Kabbalah and more earth-based Jewish practices. Jewish ethics are fascinating to me.

The chavurah I was forming here with queer Jews became a place to practice ritual that aligned politically and spiritually for me in a way that was accessible. I’ve never known Hebrew that well, because I learned it when I was 12 and I have multiple learning disabilities. For the chavurah, we had all the words transliterated. Everything was taught in a simple way. I thought, “This is the kind of Judaism I can get into.”

Throughout my entire adult life, people have come to me and said, “I don’t feel like I’m Jewish enough,” or, “One of my grandparents is Jewish. Does that make me Jewish?” or, “I kind of feel Jewish.” I’ve been so honored to be able to say, “In my understanding of Judaism, you’re Jewish. I don’t care what any establishment says.” To me, Judaism is for sharing if people want it and do it respectfully, but it took a while for me to get there. 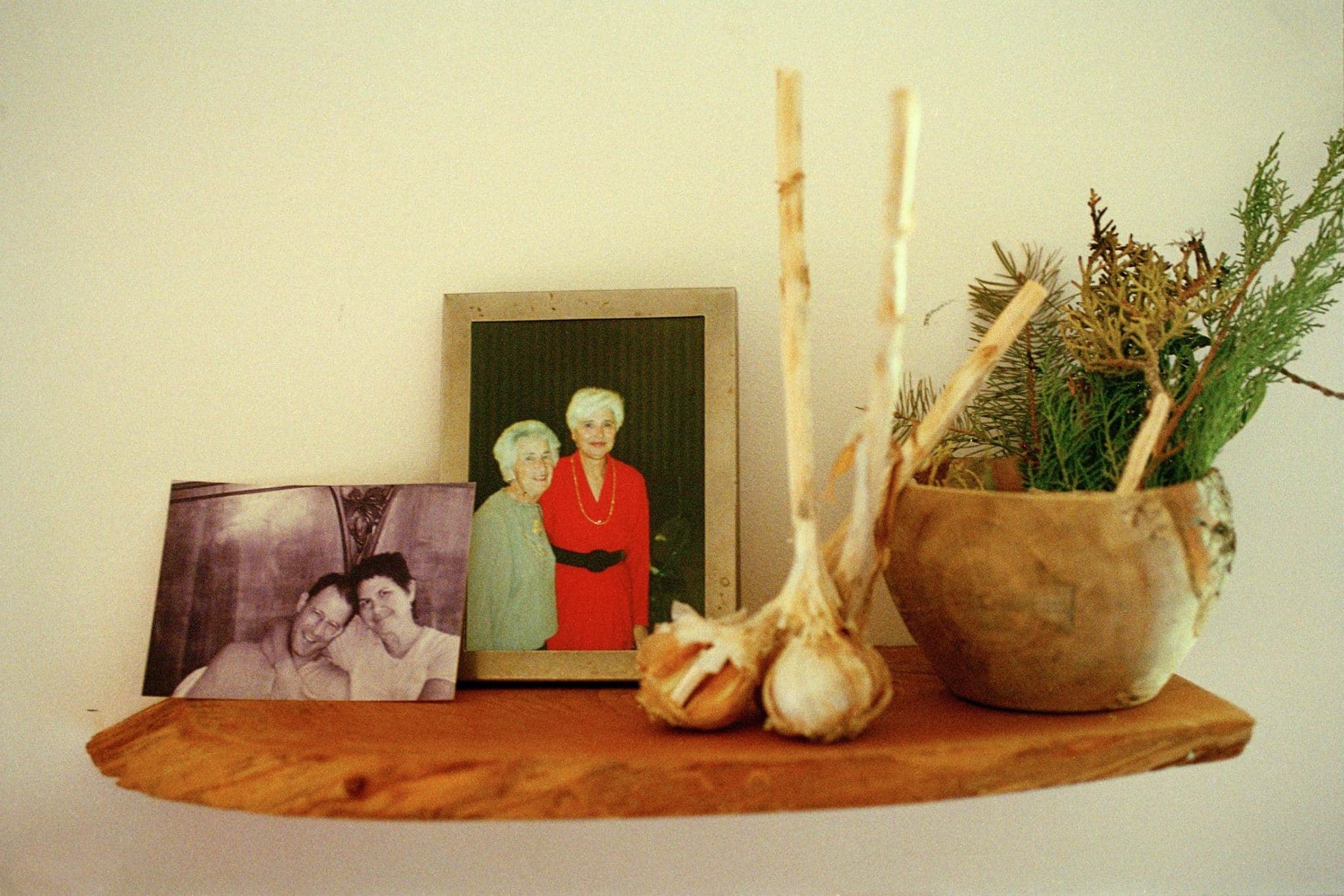 How does Jewish wisdom, practice, and identity show up for you today?

My life is Jewish. Period.

I don’t even feel that Jewish anymore because it feels totally, completely integrated at this point. In the past, I’ve had to separate – “I’m not that kind of Jew,” “I’m not Jewish in that way” – but I know who I am now and I know what I care about.

The Judaism that shows up in my life today is earth-based, feminist, embodied Judaism.

Earth-based Judaism, for me, is one that is woven into indigenous solidarity work and social justice work. What Judaism looks like today for me is the amazing calls to action, and vigils, and emails, and newsletters that I got in response to the Tree of Life Massacre. They are all directly linking that act of white supremacy to the two black people who were killed at Kroger’s the day before.

I’m struck by the cellular trauma and terror that this simulates in all of us, and that’s a real lived history of our ancestors. What Judaism looks like to me today is recognizing and aligning that terror with the terror that black people feel every time they hear about a black person being killed by a cop every few weeks. It’s how Jews of color are experiencing things, but, as Ashkenazi Jews, we haven’t had that terror stimulated so immediately.

My Judaism today feels like gratitude for the communities that I’m a part of that are acknowledging that and that are using the energies of our grief to move towards actions for justice: Jews for Economic and Racial Justice, Jewish Voice for Peace, Bend the Arc. 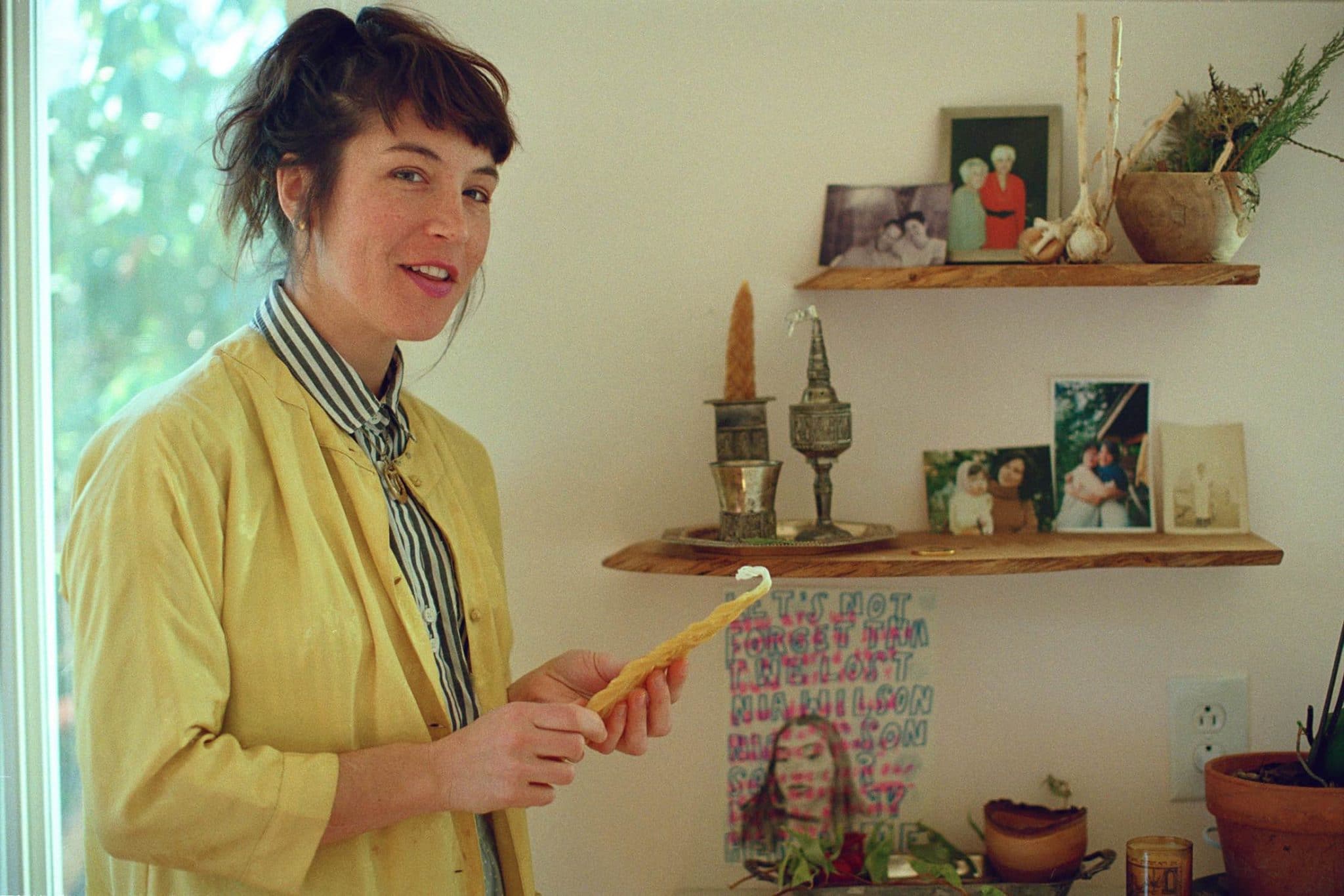 What do you most value in your friends and your communities?

I value the open expression of care and love. I’ve spent the majority of my life single, so my community and friends are exceedingly important to me. I value all those things that care and love mean, like being there for the joys and oys of life, being there for the everyday things, understanding when’s the time to listen, when’s the time to laugh.

Love is an action.

What do you love about Olympia?

I love the ferns, and the mushrooms, and living in a place that’s more in the woods. That community feels really easy, both animal and plant community and people community. I grew up here as an adult, so I’m loving being back in a place where I feel known, and I know others.

What is your favorite place on Earth?

I immediately thought of California.

If I could get a client base there, I would come down there three times a year. I love the desert. I love rocks.

What keeps you awake at night?

How do you fill your cup? 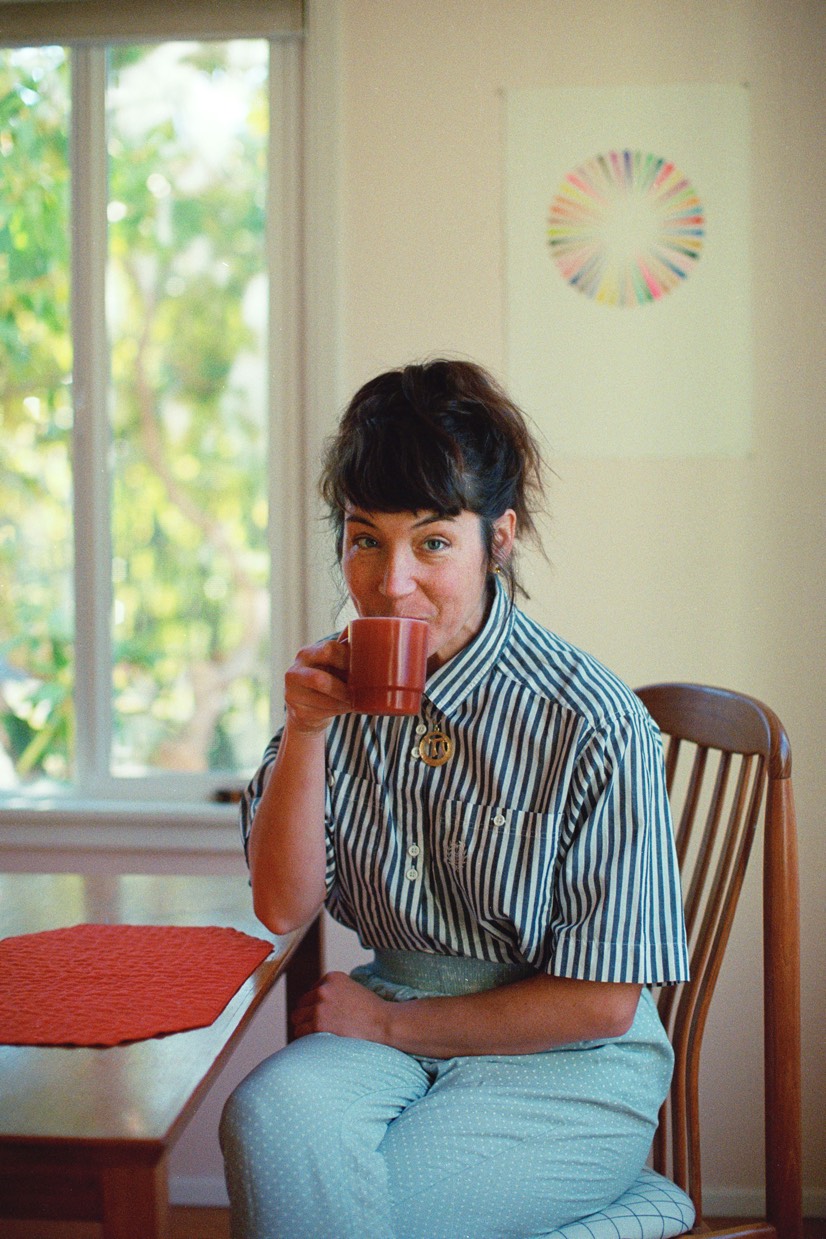 What or who is your biggest inspiration?

I’m inspired by what people are capable of doing despite excruciating trauma, that people can make beauty out of what has harmed them the most, and that this serves others. I’m equally inspired by how nature does the same, that the earth is always here to help us in this healing. I know it sounds cliche, but it’s the tree growing up through concrete, the grass coming up through the cracks in the sidewalk.

Flexibility is stronger than hardness.

What’s something you’re curious about?

How our dreams and visioning of liberation can actualize in our lifetimes.

Favorite Jewish holiday and why?

Sukkot. I love this holiday because it brings together all my favorite Jewish themes: honoring our ancestors, collaborating with plants, singing, pouring libations, and spending time under the stars with friends!